Sometimes I wonder whether I love my children too much. The intensity of feeling can be overwhelming but then I reassure myself that this is natural. This is part of my biological, prehistoric nature to bond with and adore my children. To sacrifice myself for them. There is nothing a mother wouldn’t do for her child. Or so the story goes. But this is our story, the story of mothers in the West at this particular point in history. Having just a few adored children and investing heavily in each one is a very particular phenomenon and relatively new to us in the West (although nomadic peoples for example have tended this way for much longer).

Nancy Scheper Hughes worked with and studied mother infant bonding in a particularly impoverished region of North Eastern Brazil in the 60’s and then again in the 80’s. She was struck not only by the very high child mortality rates there but also by the indifference that the mothers showed to the passing of their babies. The women she studied all had a large amount of pregnancies, on average 9 -10 and they each lost around half of those babies before reaching the age of 1. When asked what the cause of death was ‘sickness of the child’ was commonly reported.

‘Sickness of the child’ has symptoms that correlate with malnutrition and some of the related illnesses. However, these mothers described their deceased babies as ones who did not possess a ‘knack’ or will to live and that they had not shown enough fight to live. When asked what would most improve the chances of infant mortality in their community the women all listed better food and vitamins however, when it came to accounting for their own children they could not make the same connection and came back to the idea that some babies just don’t want to live.

When faced with a baby that was not showing the desired signs of vigour and liveliness many mothers respond by paying them less attention. This neglect usually hastened their demise and was a cause of great sadness and shock to Scheper Hughes in her first weeks there. What she came to understand is that mothers who are also suffering from malnutrition, almost non-existent medical services and crippling poverty, simply cannot put themselves second. As one mother put it, ‘weep for us Nancy, mothers, who are condemned to live in order to care for those who survive’.

Living in such abject circumstances mothers do not bond with their babies in the way we like to imagine mothers do. Like in many communities across the world, these Brazilian mothers do not name their babies until they can at least walk if not talk. They are shown great affection but they are not seen as fully human until they have proved themselves likely to survive into adulthood. In this way mothers protect themselves from what would be a too regular and potentially unbearable grief. Discouraged from crying at their infants very simple funerals mothers simply move on.

What this shows is that even something as simple and obvious as motherly love is culturally shaped. Bonding with your baby at birth is a luxury for many mothers and when we judge teenage mothers, or the harsher parenting that is sometimes reported from Africa for example, perhaps we should reflect on how lucky we are that we can love our babies so much. We can afford to.

Further Reading
If you think you’re not interested in reading the academic papers then think again, Scheper-Hughes is a rare and brilliant writer. I highly recommend anything by her and this article which my post is mostly based on is easy to read and fascinating.

Also in this article she returns to Brazil in 2001 to find drastically improved circumstances and a much happier story to tell. 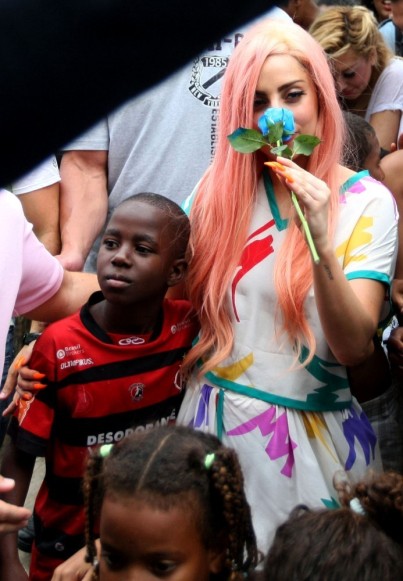 (an irrelevant image of Lady Gaga in Brazil)